E.1027 was designed by Eileen Gray and Jean Badovici between 1926 and 1929 as a vacation residence and a showpiece of modern architecture and furnishings.

Indicating the collaborative nature of the undertaking, the name of the house is a code for their intertwined initials: E for Eileen, 10 for J, the 10th letter of the alphabet, and, following this logic, 2 for B, and 7 for G. Gray was responsible for much of the design and for overseeing its construction; Badovici provided conceptual inspiration and assisted in technical matters.Read more...

"On a warm summer’s morning in 1926, Irish designer Eileen Gray drove her MG up the narrow winding mountain roads from Menton to Roquebrune-Cap-Martin and parked in the railway station.

Reaching into the back of the car she took out a rolled towel containing swim suit and bathing cap.

Having spent a fruitless past three weeks hunting for a suitable site on which to build the house of her dreams, she was taking time out for a swim.

She crossed the narrow path and walked along the cliffs. After a few hundred yards she stopped and looked down the cliffs.

To her left and half way down was a ledge: she had found the site on which she would build one of the most iconic houses of the twentieth century." Read more... 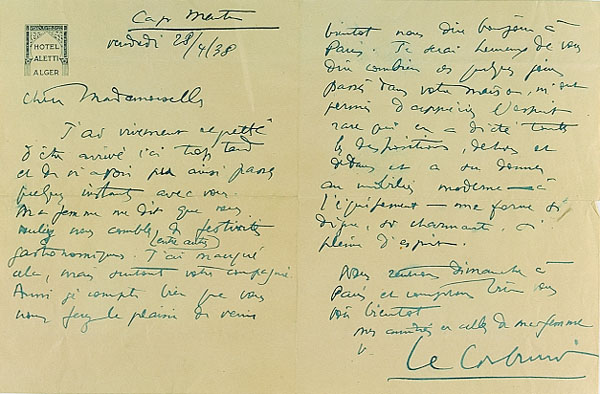 Le Corbusier, arguably the greatest architect of the 20th century, was obsessed and haunted by E-1027, the seaside villa Eileen Gray built at Roquebrune Cap Martin in 1929.

Over the decades, he sought to possess her “maison en bord de mer” in a multitude of ways. It may have been the last thing he saw before dying of a heart attack while swimming off the rocks beneath E-1027 in 1965.

After he died, the footpath serving the area was designated Promenade Le Corbusier. In time, as Gray’s reputation faded, some would even credit him with the design of her villa.
Read more..